Oh, Hobby Lobby. What have you done?

Having lived in Seattle for much of the past dozen or so years, I was oblivious to the corporate entity until the 2014 healthcare case. At the time I assumed it was, quite literally, a conservative lobby group that was fighting the ACA and claiming exemption from their responsibility to female employees. So, it was a bit surprising to hear that it was actually a retail chain. Now, here they are again in the news. This recent development for the company is both shocking and yet not surprising at all.

One may be excused for thinking that a business purporting Evangelical Christian values–that has gained legal ground on such a basis–would employ staunch ethics. However, given the moral universe inhabited by many corporate families, the fact that they can both withhold birth control from their employees and import stolen artifacts from the Bible lands is actually very consistent. It has to do with their theological anthropology, among other things.

Theological anthropology is a fancy way of talking about a biblical view of the person. It usually begins with Genesis 1:

This rendition of the creation narrative usually takes precedence over the second (yes, there are two) creation story, Genesis 2.4-25, in which God uses dirt to make the first human: adam (human) from adamah (soil). In the first creation narrative both human parties are there from the beginning, male and female. It is designed to be hierarchical with humanity atop the rest of creation. As Lynn White identified in his 1967 article (as in, fifty years ago), “The Historical Roots of our Ecological Crisis,” it is this hierarchical view of humans over creation that fundamentally shifted and shaped human ecology, the relationship between us and nature. He traces it in particular to the emergence of Frankish (religious) culture and calendars that narrate man’s dominance while providing a linear trajectory from creation to apocalypse. This is the time in history when Christianity percolates throughout Europe, gaining power in various ways. According to White’s analysis, when humanity no longer sees themselves bound to the soil along with the rest of nature, but breaks out of the cycle of seasons because God has other plans, then nature merely exists for the benefit of humankind. In other words, when we read dominion with too heavy an accent, it forms an ‘arrogant eye’ (Sally McFague, Super, Natural Christians, 1997).

What does dominion over the earth have to do with denying women contraception? Well, after a while the arrogant eye takes a rather liberal interpretation of ‘dominion’. Going back to the creation narratives, the first sets up a hierarchy, while the second introduces “Adam” before “Eve” and thereby furthers the hierarchy. As White summarizes, “Finally, God had created Adam and, as an afterthought, Eve to keep man from being lonely. Man named all the animals, thus establishing his dominance over them.” (1205) So, here we have an interpretation of total superiority over the rest of creation, starting with women, that informs relationships between men and women in conservative Christian anthropologies.

The turn to Iraqi artifacts may seem a little less obvious, but do not underestimate the powerful gaze of the arrogant eye. It reaches into jungles and deserts, mountains and wadis. 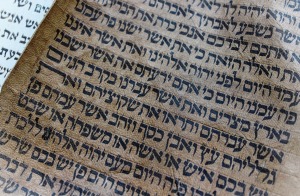 In terms of theological anthropology, a sociocultural element intersects gender hierarchy such that anyone deemed Other is relegated to a lesser level. (This is the realm of Orientalism, and postcolonial theory.) The rhetorical focus on the Bible allows for the objects of interest to be placed in a kind of metaphorical time capsule, uprooted from contemporary persons and places. Such an obsession with material things of the Bible is endemic to evangelical Christianity, and therefore unsurprising in the Hobby Lobby owners. Objects deemed “historical” are dislocated from their place of origin, the people who created it, and anyone since then who has interacted with it. In this way a bizarre duality emerges that permits fetishizing ancient cultures while simultaneously denying connectivity between cultures, peoples, and religious beliefs. The Bible Lands are valued, but not the people inhabiting them. Material evidence of Bible texts are necessary for ‘proving’ superiority over others, but the message of scripture to be humble and love one’s enemies is never heeded. Jesus himself becomes wiped of any Jewish Palestinian provenance, just as the objects themselves cannot be faithfully traced.

In a worldview that normalizes the secondary place of other persons, and treasures clay shards over the ground from which they came, it is no wonder that the company’s acquisition of material objects is unethical. They have made it clear that the Bible is their number one priority but not the Spirit and the message it communicates.

It’s here! After an arduous journey across fiber optic cables, through a printing press, and back across the country, it’s here! So honored and proud to have an essay alongside my Garrett colleagues 🤓
Impromptu car trip north for potato burrito and a visit to Whatcom creek. Some mighty good ferns, and a remarkable color of water 🌿💦
The camellia seems to have survived last spring’s heavy pruning (and the squirrels like to munch on the blossoms, as evidenced by pink carnage on the ground). 🌸🐿 #camellia #squirrelsnacks #pruningworks #winterflowers #cedarriverwatershed #mybackyard
#InternationalHolocaustRemembranceDay #shoah #wemustdobetter
Rain water careening through old pipes, smells of conté crayon, fixer, and experimentations in art. Metal shavings speckle the resin-top table that was once a door. It’s good to be writing in the company of others, in a space normally dedicated to oil, acrylic, charcoal, wire, wood, ceramics, and any assortment of found objects. Creation is creation. + + + #till #writing #phdlife #rainynight
After nine years, @garysbestfriend a proper squirrel celebration involves good, Washington wine and little hotcakes. #happyanniversary #littlecakes